Jamie Chapel was called out to a Townsville property on Tuesday night to catch the coastal taipan, considered one of Australia’s deadliest species.

He was halfway there when the client told him a frog was eating the snake.

When he arrived at the property, the “quite large” frog had eaten all but the head of the 20-25cm taipan.

END_OF_DOCUMENT_TOKEN_TO_BE_REPLACED

Where did this virus come from? A new study points to a slithering suspect: Snakes…!!!

A new study suggests snakes may be the source of the new coronavirus causing an outbreak in China. Above, an image of Naja atra, a type of snake common in southeastern China.

Editor’s note: This article was updated on Jan. 23 to include discussion of the controversy around the new study.

As an outbreak of a new coronavirus continues to grow in China and spread to other countries, one question remains: Where did the virus come from? Now, a controversial new study points to a slithering suspect: snakes.

END_OF_DOCUMENT_TOKEN_TO_BE_REPLACED

A far north Queensland family saved a 22-month-old boy from the jaws of a four-metre-long scrub python after it latched onto the child while he was playing at the family home in Julatten, north of Cairns.

Mother Amanda Rutland said she was horrified when she discovered the snake had bitten her son and was wrapping its body around the young boy on the afternoon of October 13.

“Something that size and he’s so tiny … It was scary as hell, I can’t put into words,” Ms Rutland said.

END_OF_DOCUMENT_TOKEN_TO_BE_REPLACED

After a day in the pool of their new Airlie Beach home, the Thompson family and their friends were heading inside when screaming rang out.

The sight which confronted Evan Thompson is any parent’s worst nightmare. 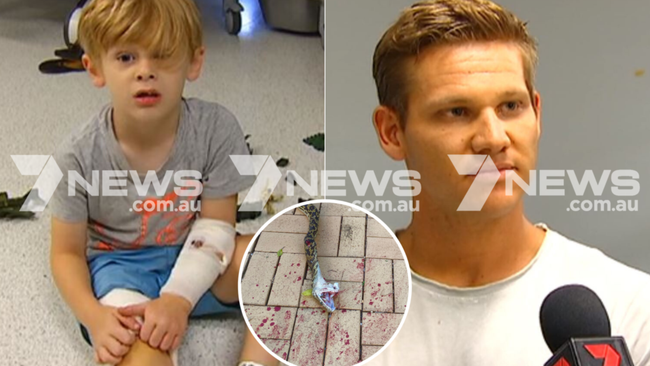 “I just heard this bunch of screaming. I instantly turned around and just saw what was happening,” Thompson told 7NEWS.

A large scrub python had hold of his four-year-old son Clifford.

END_OF_DOCUMENT_TOKEN_TO_BE_REPLACED

A quintessentially Australian photo which could only have come from WA’s Kimberley has gone viral, as social media across the world marvelled at a python playing pick-up to a bunch of amorous cane toads.

Helicopter pilot Paul Mock snapped the photo of the olive python — named Monty, of course — onboard was a contingent of cane toads on its back in the wake of an inundation of 68mm rain at his Kununurra WA property on Monday.

Mr Mock doesn’t have social media but decided to send the picture on to his brother Andrew, who quickly uploaded it to Twitter where it caused a storm.

END_OF_DOCUMENT_TOKEN_TO_BE_REPLACED

A FIGHT between a brown snake and a Japanese hunting dog has played out in front of a security camera at a home north of Adelaide.

For more than two minutes, dog and snake joust and strike, with both appearing to land blows.

Chardy keeps pulling the snake back to the lawn, immediately in front of a security camera in a nearby window of the house.

END_OF_DOCUMENT_TOKEN_TO_BE_REPLACED

The Trinity Beach resident was bitten by a spotted python.

A north Queensland man has been bitten by a metre-long snake curled up under a pillow on his bed.

The Trinity Beach resident was going to sleep on Friday night when he slid his hand under the covers, only to get the fright of his life.

Cairns snake catcher Matt Hagan was called to remove the 1.2-metre reptile and comfort the man and his wife, who had been rattled by his screams.

“His wife was in the lounge room at the time and said he was making some noises that weren’t very compatible with sleep,” Mr Hagan said.
Advertisement

“When I got there, his wife was steadfastly refusing to go back inside the house … she suggested we either burn it down or they were moving to New Zealand.”

The spotted python left the man, who the snake catcher referred to as Jack, with a small nip on the finger before quickly retreating to a bedside table.

“I live in England and mum called me at 8am,” she said.

“I thought someone had died but in the end I died laughing!”

Mr Hagan said it was one of the fattest snakes he’d had to relocate.

A warm bed would seemingly be the ideal spot to curl up for a winter hibernation, but Mr Hagan said snakes are still active because of unseasonably warm weather.

“We’re still getting calls that pets are being eaten, which we usually see die off around this time,” he said.

Mr Hagan also relocated a coastal carpet python from a boat at Kuranda over the weekend.

Porcupines are often attacked by other animals that are trying to cash in on a huge feast. However, it’s a decision that is usually regretted instantly.

Case in point: this African rock python made a meal out of a porcupine at a game reserve in South Africa, only to suffer the consequences a day later.

Once the snake was cut open, it was clear that the porcupine’s quills caused fatal internal injuries.

Photos below reveal the connection with a python & a porcupine